Appointment of Interim Chairperson of FARA 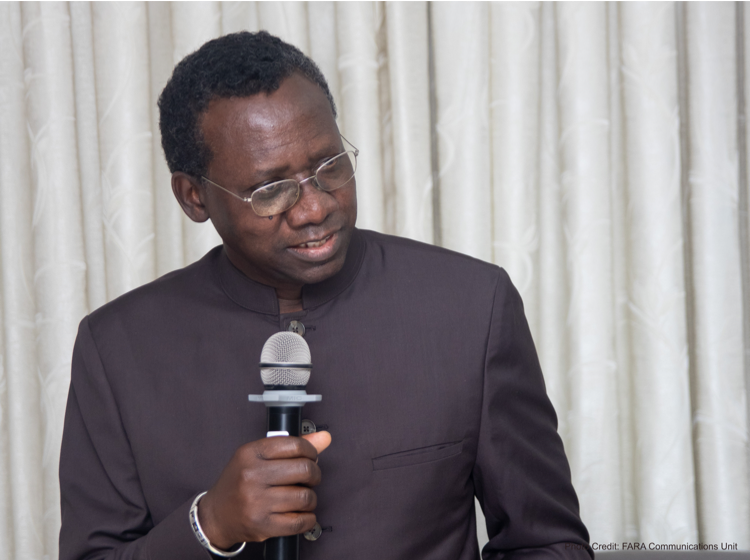 July 15, 2019 By Benjamin Abugri No comments yet Press Release

The Board of Directors and Management of the Forum for Agricultural Research in Africa (FARA) announce the appointment of Dr. Alioune Fall as the new Chairperson ad interim of FARA, effective July 2, 2019. Dr. Fall was elected the Vice-Chairperson of FARA for a three-year term by the General Assembly of FARA at its 7th sitting in Kigali, Rwanda on 16th June 2016.  He succeeds Dr. Ephraim Amiani Mukisira (MBS, OGW).  The Board and Management of FARA gratefully acknowledge Dr. Mukisira’s inspirational and steadying leadership.  He skillfully steered the organisation through its most testing period.

Between 2000 and 2008, Dr. Fall was the Director of the Agricultural Research Centre of Saint-Louis. In 2002, he became the National Coordinator of the CORAF Research Hub on Irrigation Systems. During that period, he was actively involved in the harmonization of the rating systems and evaluation of researchers and university lecturers, for the entry of ISRA into the African and Malagasy Council for Higher Education (CAMES). He also participated in negotiations with the Government of Senegal on the regulations to make ISRA more effective. He was instrumental in the establishment of a consultation platform for Presidents of Universities and Directors of Research Institutes in West Africa to break down silos at national and international levels. He chaired this platform from 2014 to 2016.

Dr Fall served as the Scientific Director of ISRA from 2008 to 2013 when he was appointed the Director General. He served as the Chairperson of CORAF’s Board of Directors from 2014 to 2018. He has been a member of the CIRAD Scientific Council since August 2016 and was appointed Chairperson of the Council by Decree of the French Minister of Agriculture in February 2018. In 2017, he was elected Chairperson of the Korea-Africa Food and Agriculture Cooperation Initiative (KAFACI) which brings together 23 African countries in bilateral cooperation with South Korea.

In 2009, he was elected President of the Senegalese Association of Agricultural Engineers.

Dr. Fall was made Knight of the Order of Agricultural Merit of France in 2017. He was also awarded Knight of the National Order of the Lion (Senegal) in 2018.  He is the author and co-author of several publications in the fields of agriculture and agribusiness.

Please join us in welcoming Dr. Fall as he takes up this challenging task at a very important phase of the organization’s lifecycle.