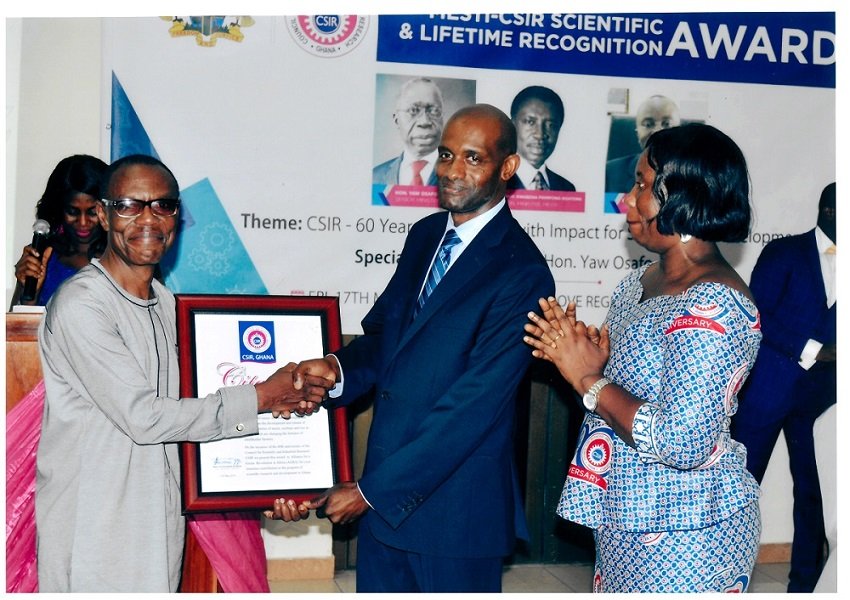 The Forum for Agricultural Research in Africa was among the recipients of Ghana’s Council for Scientific and Industrial Research (CSIR) Awards, during a ceremony to honour scientists, champions of science and research and  industry players who have made outstanding contributions to Ghana’s scientific and industrial development over the past 60 years. Held on Friday, 17th May 2019 at the Coconut Grove Hotel in Accra, the event was one of the activities organised to mark the 60th anniversary of the CSIR. It was graced by, among others, Mr. Yaw Osafo Marfo, Senior Minister who was the special guest of honour; Professor Kwabena Frimpong-Boateng, the Honourable Minister of Environment, Science, Technology and Innovation; and Professor Robert Kingsford-Adaboh, the Chairman of CSIR’s Governing Council.

FARA’s award was received by Dr. Aggrey Agumya, Director for Stakeholder Engagement and Communication on behalf of the Executive Director, Dr Yemi Akinbamijo. 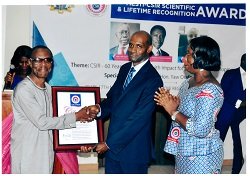 Among the awardees was the 94-year-old Dr. Leticia Obeng, a heroine scientist in Water and Environment, the first Research staff to be recruited by the CSIR and the first Female President of the Ghana Academy of Arts and Sciences. Dr. Obeng is also a recipient of Ghana’s highest national award, the Order of the Star of Ghana (2006).  Professor Kwabena Frimpong-Boateng received a citation for scientific excellence in medicine.

Mr. Osafo Marfo commended CSIR for its immense contributions towards the socio-economic development of the nation, especially, for producing improved varieties of the country’s main staples. He urged it to ensure these varieties become easily accessible to farmers and industry players. He announced that Cabinet had approved an increase in spending on science and technological research from 0.3 per cent of GDP to one per cent.

Prof. Frimpong-Boateng acknowledged the distinguished scientists, stakeholders and former staff of CSIR for contributing substantially to the growth of the country over the past 60 years. He underscored the instrumental role of science and technology to the attainment of the President’s vision of an industrialized nation that is also beyond aid.  He pointed out that this will require stronger coordination among the relevant sectors and actors.

Professor Victor Kwame Agyeman, Director-General of CSIR, welcomed the strong support the government has extended to scientists and suggested the introduction of a “Science Day” to commemorate and increase the visibility of the work of scientists in the country.