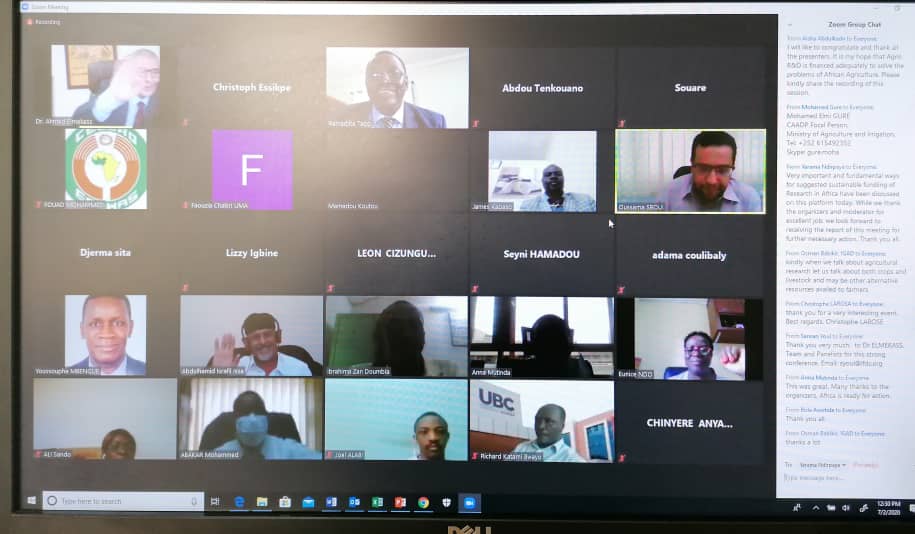 Dr. Akinbamijo was speaking at the African Union Semi-Arid Food Grain Research and Development (AU-SAFGRAD) conference on Thursday, on Innovative financing Mechanism for Agricultural Research and Development in Africa. The conference which was under the theme, “towards achieving the African recommendation of expenditure of 1% GDP on research and development”, drew close to 200 participants across the agricultural research spectrum and was aimed at discussing the strategies for mobilizing alternative financing mechanism to support research activities at country level and to learn from countries like South Africa that have succeeded in engaging businesses and the private sector to finance agricultural research.

While lauding the commitments of governments over the past half-decade, Dr. Akinbamijo noted that a lot more needs to be done if the continent must eventually wean itself from donor-dependency. Justifying this call, he touched on a recent data from the Programme of Accompanying Research and Innovation (PARI) research on funding sources for agricultural research in 12 Africa countries which suggested that 47.6% of the funds is from national governments (including staff salaries and emoluments), 27.0% from donors and 25.36% from research institutes’ internally generated funds.

“A lot of effort has been justifiably dedicated to agriculture in the last 5 decades…but sometimes, a lot is not enough”, he said.

He also elucidated the perennial challenges which bedevil the agriculture and the food system of the continent, touching on the gap between employment and income, resulting in widespread poverty, relatively low productivity, and rapidly rising imports.

Dr. Yemi Akinbamijo also presented a scenario analysis conducted by FARA to explore potential pathways for agriculture-driven transformation using the International Futures (IFs) modelling platform that was informed by the World Economic Forum’s Scenarios of Agricultural Transformation (WEF, 2018). The study summarizes the importance of Agricultural Research and Development (ARD) and the uncertainties which will prove to be very key drivers of agricultural transformation, going into the future.  The most uncertain drivers were noted to be Agricultural Productivity & Innovation and Governance for AR4D. These, Dr. Akinbamijo recapped, is where African AR4D institutions should pitch.

In response to these, Dr. Abdou Tenkouano, Executive Director of CORAF, pointed at the need for Africa to look inwards to raise the necessary investment to fund its agricultural research.

Dr. Ramadjita Tabo, Regional and Research Program Director, International Crops Research for the Semi-Arid Tropics (ICRISAT), West & Central Africa; touching on the impact of local initiatives, mentioned that the strengthening of input shops has led to increase in fertilizer use by 36% on millet, 34% on sorghum, 58% on maize and 73% on cowpea. This he indicated is a great example if the countries are willing to commit at least 1%of GDP to agricultural research.

Making a strong case for an innovative financing mechanism for agricultural research and development in Africa, Dr. Yemi Akinbamijo concluded that, financing AR4D is one of the 8 Megatrends that will determine the future of Africa’s livelihood; and therefore, called for new partnerships, funding mechanisms and frameworks for financing AR4D to support major interventions to achieve STISA, Agenda 2063 & the SDGs.