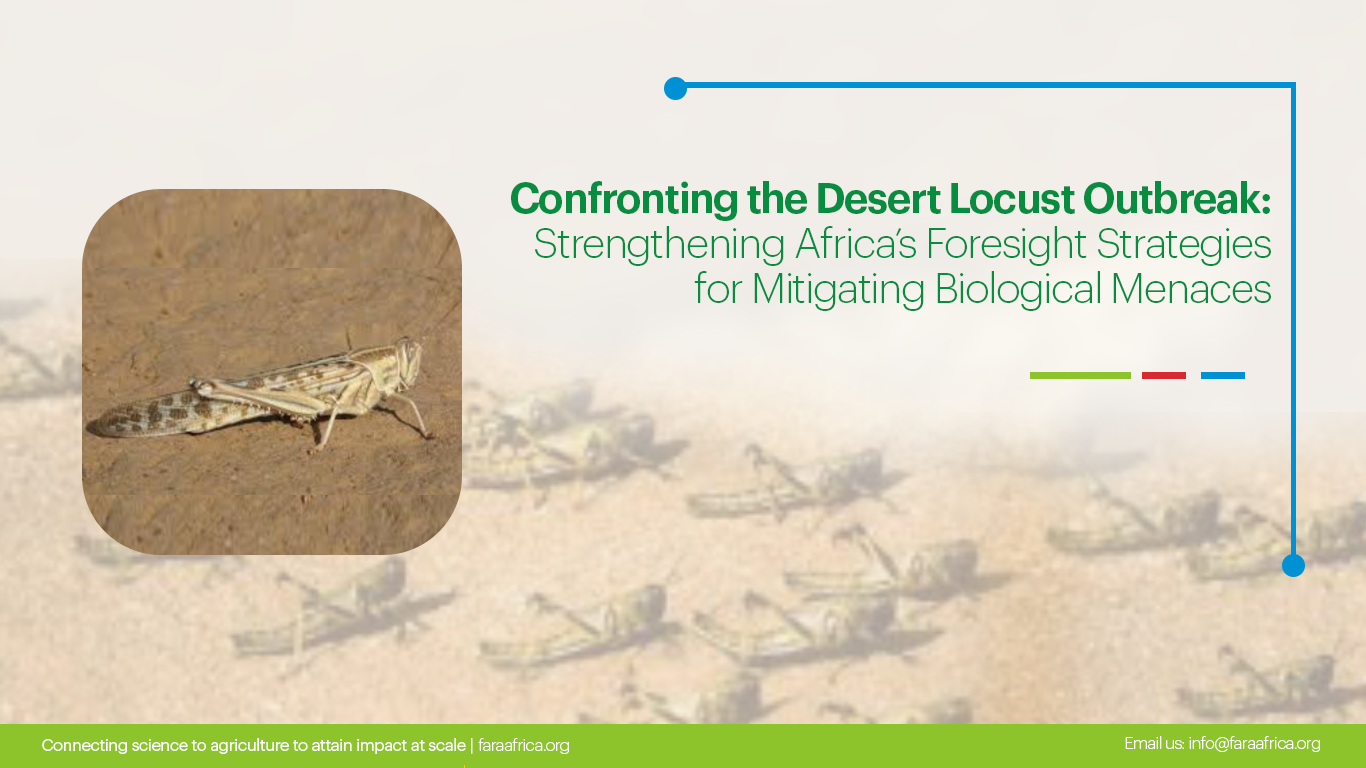 The threat to food and nutrition security in Africa has increased with the reemergence of desert locust (Schistocerca gregaria) in Eastern Africa at a scale not seen in the last 7 decades. “In the Horn of Africa, the worst affected area, there is an unprecedented threat to food security and livelihoods as swarms increase in Ethiopia and Somalia and continue to move south to Kenya where they have spread to 14 northern, central and southwest counties, reaching within 200 km of northeast Uganda and southeast South Sudan.”   Ground and aerial control operations are ongoing in the affected countries, including Oman, Saudi Arabia and to a lesser extent Yemen.

Triggered by changing climate, the locusts have been breeding in large numbers and projection indicates that the threat will persist especially due to newly introduced varieties of crops. With swarms advancing across the region, active oviposition portends significant danger with the development of hopper bands and subsequent emergence of even higher number of swarms in the coming days and weeks and if left unchecked, could grow 500-fold by June (Nature 2020).

In a continent that is already slammed with the heavy toll of climate change, largely desertification and water-stress scenarios, the ravaging menace of anything vegetative by the desert locust scourge is the least Africa needs today. The implications for food and nutrition security in the medium to long term will be colossal.

As the custodian of agricultural research for development in Africa, the Forum for Agricultural Research in Africa (FARA) the current onslaught by the gregarious locusts calls for concerted and coherent efforts to leverage science and technology to address this problem.

Earlier in December 2019, the Desert Locust Control Organization for Eastern Africa (DLCO-EA) had warned of the presence of immature and mature swarms around northwest Somalia and eastern Ethiopia (1109N/4242E and 1147N/4242E). However, the eventual outbreak in the region and beyond underscores the need for strengthening Africa’s capacity for the development of anticipatory strategies of containing and mitigating biological menaces.

FARA calls for stronger institutional alignment among key stakeholders in this respect, by leveraging science and technology to confront the biological menace and strengthen the ecosystem for developing joint response mechanisms to emerging technology and innovation issues, including threats by desert locusts.