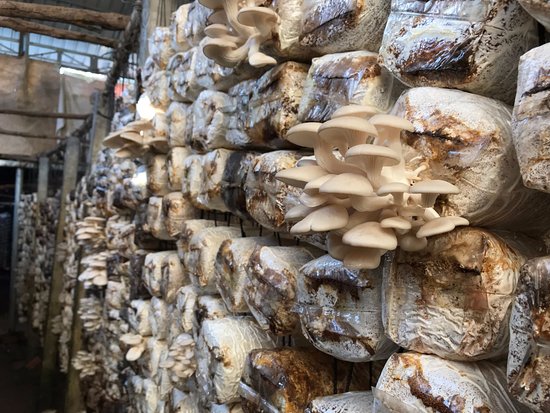 Mushroom cultivation requires a very well managed local climate which must be cool, adequately ventilated, with high humidity and optimal light. This becomes especially necessary at the cropping stage. Conventionally, small to medium scale growers achieve this by construction of thatch-roofed structures having bamboo, coconut frond or palm frond walls. Although these materials are relatively cheap and easy-to-find they tend to have a short life span and also require a lot of maintenance and repairs. The latter materials also lack the ability of protecting the mushrooms from pest attack. In addition, the floors of such mushroom cultivation structures are usually bare ground which further allows rodents/pests (which were common at the selected site) to have access into the structure to contaminate and destroy the mushrooms and bags.

Being fully aware of the challenges regarding creation of a conducive environment for mushroom cultivation and the prevailing pest situation at the current location, the project team applied a good degree of innovation and novelty in the “Using cassava peels for mushroom cultivation” Project. These constituted a prominent part of the achievements or successes of the project.

Having sustainability in mind from the very onset, corrugated roofing sheets were used for the entire mushroom house to increase its lifespan. The metallic roofing sheets however presented a challenge in respect of heat generation and this was resolved through the use of a layer of Envirotuff® immediately beneath the roof. The cropping room was further given a ceiling of plywood which had been padded with an upper layer of expandable Polystyrene to prevent heat in the room. In addition to the “brapaa” (woven palm fronds) that was used as wall material for the mushroom house in this project layers of mosquito net and wire mesh were used. The latter served the purposes of keeping out flying insects and rodents respectively in an effort to promote hygiene and strengthen the walls for durability. Again, in order to keep rodents out of the mushroom house concrete floors and three (3) courses of Sandcrete blocks were constructed to form the base of the structure.

There was an element of uncertainty in the initial stages but the project team was very pleased to have been successful in its improvisation efforts. Very good harvests were obtained from the use of these unconventional building materials for the mushroom house. Thus, the success of the novel structure will enable the project to have greater impact in the long-term as the local community will enjoy a longer use of the facility. The mushroom house will also serve as a training centre for a relatively longer period than the conventional version in aid of sustainability and tangible impact.

Currently, the Gyaman Senior High School in the immediate environs of the project site has expressed interest in taking advantage of its proximity to train students offering the Agricultural Science programme. The Director of the Gomoa-East District Agricultural Development Unit has also expressed similar interest in using the mushroom infrastructure to train farmers in other communities within the district in mushroom cultivation as an alternative livelihood skill.

The “Using Cassava Peels for Mushroom Cultivation” project is also supporting Food and Nutrition security in the local communities as their interest in mushroom consumption is on the rise. Members of the processing group have also been using some the harvest to support their nutritional needs. Some individuals in the community have requested for inoculated bags for production so that they can have regular supply from their homes. The local group has bought into the project by taking full ownership responsibility for its sustainability.

Edited and published by FARA